THE JOUSTING OF THE GARGOYLES - RULES

Paperfolders of the world:
In this day, November 11th 2010, that we celebrate The International Origami day, The Madrigal’s Jousting announce you the opening of its fourth version. This time the name of the Jousting is:


“THE JOUSTING OF THE GARGOYLES”
In honour to Eric Joisel
In architecture, a gargoyle is a carved stone grotesque with a spout designed to convey water from a roof and away from the side of a building. Preventing rainwater from running down masonry walls is important because running water erodes the mortar between the stone blocks.[ The term gargoyle is most often applied to medieval work, but throughout all ages some means of water diversion, when not conveyed in gutters, was adopted. The huge quantities of different gargoyles designs, using human and animals parts mix toghether, around the world and the imagination of creator make this a rich field for origami designs.

This contest is dedicated to Eric Joisel for his wonderful contribution to the artistic concept to the Origami work in its higher expresion. Some of his magic work could be seen at: 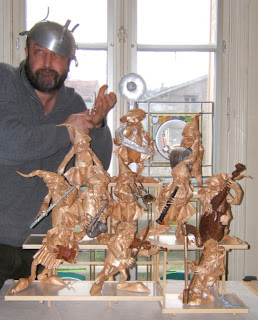 A. CONTEST RULES
1. The contest will be divide in three different competitions:


A. Minicontest: I have decided to let the people design the new Herald for this Jousting as a mini-contest: Quasimodo, The Hunchback of Notre Dame. For this mini contest all people can participated even the judges. The Minicontest starts November 11, 2010 and ends January 31, 2011. Selection time will be held during the first 15 days of February and the winner will be announcing about January 16. The creator of the winner model should let me use his models as the Herald during this Jousting period. I should be allowed to manipulate the picture in photoshop in order to create the scenery for the jousting news as previous competitions. The model will be use exclusively for the jousting and the owner should agree with that but just during this jousting period.
B. Competition by categories: models compete with others that have been declared in that category. The category is chosen for a particular model by the competitor; however, there could be a recommendation from the Herald. The categories are the following:

b. Minimalist and Abstract Origami

d. Origami for Masters: BUSTS AND MASKS. THE EXPRESION IN THE GARGOYLES’ FACE.

C. Competition by the pool: all models compete against each other. The aspects to be analyzed are: 1. Origami skill of the model, 2. Esthetic aspects of the model and 3. Correspondence of the model with the jousting subject.

2. You can participate in any one of the categories with as many models as you want.

3. Each new version of a previous model will replace the old ones. The pictures could stay but you should point out which version is going to the voting stage.

4. You will have 10 months to design and present your model or models, starting on November 11th, 2010 Kiritimati time, island of the Kiribati Republic until September 30th, 2011 American Samoa time.

5. You have to do your own research about Gargoyles and select all the aspects you believe are important for the design. In the Jousting blog each month we will upload some reference articles or other aspects related with the subject. The blog Jousting and Challenges/ Creativity in motion is at: http://joustingandchallenges.blogspot.com/

6. As the selection process is by pictures in Flickr, there is a new album where you have to upload the pictures of your models. If you decide to participate in the contest ask to join the Flickr group. The link is:

7. To subscribe to the contest you should ask the A Form sending an e-mail to eric_madrigal_cr@hotmail.com

8. The B Form has to be send with the model presentation. If you are going to present more than one model, each one has his own B form. Remember to indicate the model category. Each participant will have a file with their inscription and the respective forms for their models. Always send your forms to: eric_madrigal_cr@hotmail.com

9. Once you have your model designed, upload the picture (s) to the album.

10. The participation is free and without any restriction.

11. The models will be evaluated by the follow aspects: originality, similarity with the real model, esthetic, expression and fold skills including paper selection. The creators have to send the right pictures that show the mention aspects. That means that the picture quality can make the difference in the selection (even knowing this is not a photography contest)

12. Each month or when necessarily there will be updated news about the Jousting status.

Summary:
Step 1: Request, fill and return the A form to eric_madrigal_cr@hotmail.com
Step 2: Join the Flickr group (you must have a Flickr account):
http://www.flickr.com/groups/la_justa_de_las_gargolas
Step 3: Design a model and take good pictures.
Step 4: Upload the pictures in the Flickr group.
Step 5: Fill B form and send to: eric_madrigal_cr@hotmail.com

B . FOLDED MODEL, DIAGRAMS AND CP
13. You don´t have to send the model to anywhere and we’ll not ask for diagrams


C. THE JUDGES
15. The jury is conforming by 13 judges that will select the winners

16. Five judges of the jury are named the Judges of Peace and they have to resolve any tie.

18. The selection of the winner for each category and in the pool will be done in four stages:

1st stage: Each judge will select the 50% of the models. The 50% with more votes will go to the next stage
2nd Stage: In this stage, judges select 12 models.
3rd Stage: Five models will be select, the 4°place and 5° place and the three models that will pass to the final stage
4rd Stage: The judges will indicate their preference between the three models. If one model has the ABSOLUTE MAJORITY, that one will be the winner, but if that does not happen, it’ll be required to do a second round between the two models with more votes.


D. THE PRIZE
20. The winners will be announced on October 24th 2010, birthday of Lillian Oppenheimer

21. In case to raise the funds by means of donation there will be a prize for the Champion in the pool. Otherwise, it is my shame to indicate that there will be no prizes.

22. The prizes, if any, will be sent to the winners to anywhere in the world by certificate mail.

23. All participants will have a participation certificate that will be sent to the address indicated in Form A.


E. THE NEW JOUSTING
24. The new jousting will be announced each November 11 joining the celebration of the Origami Day in Japan and the end of the International Origami Days.


F. DONATIVES
25. All judges and participants are invited to help to find any contributors to collect the money for buying the paintings, the certificates and other administrative costs.

26. All donations should be done by Western Union
Posted by Eric Madrigal at 10:10 PM

Ask challanges and give themes to my address: eric_madrigal_cr@hotmail.com.

The designed models should be shown with a short description of yourself. Include your web page or flickr album or blog and use this blog to promote yourself.

Challenge has no prize. The blog is in english and spanish.

Only two challenges by person at a time.

Once the challenge is complete, everybody is invited to make a aesthetic criticism about the model. This is a very important aspect in this blog as it is an invitation not only to creativity but to excellence in performance. Criticism can be tough but respectful.